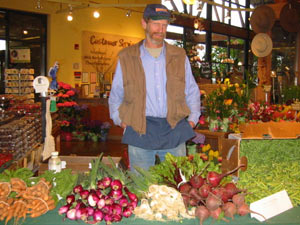 The seeds for Terra Firma Farm were planted in the late 1980s when Paul Holmes began farming a few acres in the hills west of Winters with a few friends under the name Sky High Farm. Paul developed a following for his garlic, tomatoes, and other vegetables as one of the founding members of both the Davis Farmers Market and Berkeley Farmers Market. Sky High Farm was also one of the original members of California Certified Organic Farmers, prior to official state and federal recognition of organics.

In the early 1990s, Paul hired Hector Melendez-Lopez and Paul Underhill (Pablito) as employees. Pablito became a partner in 1993, when the name of the farm was changed to Terra Firma, and Hector joined on in 2005. 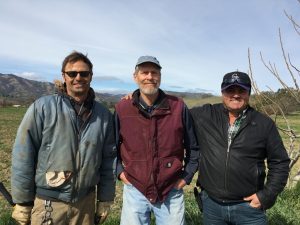 Terra Firma started its CSA in 1994 with a few dozen acquaintances at a single drop site in San Francisco’s Mission District (Capp Street). As word spread and the CSA slowly grew to include other sites in the City, the East Bay, and Sacramento. The farm grew as well. We rented additional fields for growing vegetables and leased small neglected or abandoned fruit orchards to augment the vegetables. We currently provide food for about 800 subscriber households farming around 150 acres of vegetables and 50 acres combined of fruit and nut orchards. 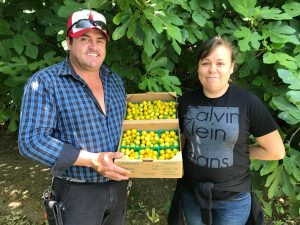 Before he became a partner in Terra Firma, Hector became one of its landlords when he and his family purchased 25 acres of land we were already farming, in 1999. In 2003, with the critical help of CSA subscribers, Paul and Pablito were able to finally purchase 80 acres of land. With the addition of Hector to the ownership team in 2005, Terra Firma has secure tenure on fully half the total land we farm.

Like the households of many of our subscribers, Terra Firma is a non-traditional version of a “family farm”. Nonetheless, Hector’s mother wife, Elena, and son Hector Jr., work in critical positions on the farm.