The Answer to Last Week’s Question is:

The Answer to Last Week’s Question is:

Last week’s newsletter was titled “How Cold is Too Cold?”.  Well, this week we know.  The answer is “24 degrees”.

We’ve been growing apricots and peaches at Terra Firma for over 30 years.  In that time, we’ve never seen a freeze destroy the crop.  Older farmers had told stories about it happening so I’ve always known it was a possibility.  And we’ve had plenty of close calls.  But this time was different.

Last Wednesday night after the sun went down, the temperature dropped like a rock as the cold airmass settled in.  By 8:30 p.m. it was already 35 degrees and the sky was clear, meaning it was going to get much, much colder by dawn.  We turned on the sprinkler systems in the orchard, which generally raises the temperature by 1-2 degrees.  Nothing more to be done.

When I got up at 5:30 the next morning, my phone was blowing up with reports from other farmers in the area.  My weather stations were showing 25 degrees, and then as I watched, they dropped to 24.  Some of my friends in colder areas reported as low as 19 degrees and a friend just down the road was seeing 21.  TOO COLD!  To put that in perspective:  these temperatures would be very cold even for December, which is when all of our past deep freezes have happened.  Temperatures that low can damage our winter crops, to say nothing of delicate blossoms of summer fruit. 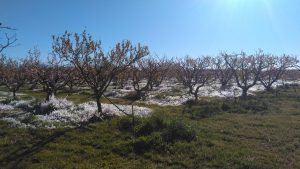 Ice on the ground after overnight watering in the orchard

Last week’s cold was historically unprecedented for late February, and set numerous records.  But the bigger issue is that the weather just two weeks earlier had also set records — for heat.  The hot weather mid-month had pushed fruit and almond trees to bloom early.  This one/two punch of hot weather followed by freezing weather was catastrophic for the crops involved: almonds, peaches, nectarines and plums.

The geographical area involved is also historic, stretching from Chico down to Modesto.  Spring freezes, when they have occurred in the past, have tended to affect small areas — microclimates where cold air pools.  This was a large-scale event.  Farmers are still assessing the damage, but at this point it’s more a question of determining whether any areas actually avoided the freeze.  The biggest impact, by far, will be to the almond crop which was in full bloom at the time, just as our peaches were.  Had it not been for the Russian invasion of Ukraine the same day, that story may have actually made the news.

Once you learn how to identify a frozen blossom, it’s pretty easy to tell from just looking at it, but you still need to check a large number.  Each peach tree, in particular, has hundreds of blossoms and only a fraction of them pollinate even in a good year.  And we have dozens of varieties, each offering the possibility that it might have escaped damage.  But after checking every row of trees, it’s clear that our loss at Terra Firma is just shy of total.  I identified only 3 varieties of peaches, 1 of nectarine and 1 of apricots with undamaged blossoms, all of which had just begun blooming when the freeze hit.   Speaking in the most general of terms, that may be enough to include some fruit in your boxes for three or four weeks.

Over the years, our summer fruit has become a more and more important crop to the farm — and to our CSA.  As you know, we send you peaches or nectarines every single week from the 1st of May to Labor Day most years.*  Along with tomatoes, they are the quintessential “taste of summer” and it’s hard to imagine the season without them.  Over the next month or so we’ll be querying other farmers to see if anyone’s fruit survived the cold and if they might have fruit available for us to include in your boxes.  But it’s very easy to imagine that stone fruit will be hard to come by this summer.

On a scientific level, this type of event is a good reminder that agriculture — and thus modern human life — is predicated on a very narrow range in temperatures, happening at predictable intervals.  The most recent UN report on climate change focuses heavily on the predicted impacts on agriculture worldwide, and urges governments worldwide to focus on rapidly adapting crops to extreme temperatures to avoid massive shocks to our food supply.   It’s trendy right now to talk about how efficient it is to farm indoors, but agriculture is the human race’s first and most efficient use of solar power.

Of course no one with starve without peaches, but they do make life much more enjoyable.  Their loss this year is a poignant reminder that our failure to confront climate change will have consequences for almost everyone.

* We have also just begun work on a new orchard that will expand our stone fruit season into October.