There’s a farmer saying that vegetables are like babies, requiring constant attention.  We spend most of our time around here tending to the veggies, sometimes more than they deserve.  Yet our farm also relies heavily on so-called “permanent crops”:  fruit and nut orchards and vineyards.  In fact, they make up a third of the acreage we farm and a very important component of your weekly CSA boxes.

It’s true that trees and vines  don’t need quite as much attention as vegetables.  Planting an orchard is a big job, that you need to get right unless you want to have to tear the trees or vines out before they have finished their life.   But you only do it once, and after the trees are a couple of years old though, they just need to be watered, fertilized, pruned, and harvested.

Mid-winter is pruning season.  For deciduous trees, there are a dozen reasons why it’s preferable to prune when the trees are dormant and the leaves have fallen.  Among others:  there is no fruit or flowers  to knock off the tree,  it’s  easier  to see the branches you’re cutting when the leaves are off, and the orchards aren’t usually being irrigated.  But the biggest reason is that for most farms,  winter is their slow season.  Citrus trees, which are evergreen, get pruned in the spring after harvest is completed.

Our peach orchard is by far our biggest pruning job.  We have almost ten acres of peaches, so at 125 trees or more per acre that means we have over 1000 trees to prune.  And while  pruning of our citrus, walnut and pistachio orchards (and everyone else’s) is done mechanically, peach trees must  be trimmed by hand, with a handsaw and pruning shears.  Pruning peach trees is a task that requires skill and experience;  a poorly pruned tree can fail in any number of ways.  If you take off too many branches,  or the wrong branches, you will end up with few or no peaches.  If you are  too cautious in trimming, the tree will  be left with too much fruit that won’t size up.  Branches that are too long will break under the weight.

At Terra Firma, the task of pruning is made even more complicated by the fact that we grow 40 different varieties of peaches and nectarines.  Each variety has certain quirks in its growth habits and fruiting pattern.  Just as you are getting in the groove of pruning one variety, it is time to switch to a different one and re-evaluate your strategy.  Ideally, the people doing the pruning have harvested the fruit in previous years and can visualize what the tree  will  look like come summer when they are loaded with fruit.

We also have several “generations” of peach trees.  The oldest and largest  were  planted in 2006 but we have been adding to the orchard ever since, with blocks planted in 2009, 2011, 2014, and 2019.  The younger trees must be “shaped” as they grow, while the largest trees must be kept from getting too tall.  Each generation requires a different approach. 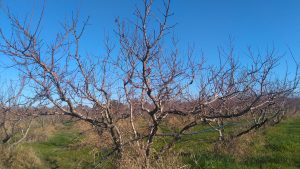 After Pruning (not the same tree)

We can’t prune trees when it’s raining:  it’s dangerous, awkward, and bad for the trees.   Since it rained almost every day in December, we are now playing catch up and racing the clock as our earliest peaches begin flowering around the first of February.  We’re about halfway done, and the weather looks like it will stay in our favor.  Once we’re done pruning the peaches,  we can move on to the apricots and persimmons.   Those are orchards are much smaller, and the trees won’t bloom until later in the spring.

Meanwhile, with the sun and dry weather, the “babies” on the farm are starting to demand our attention:  “weed me!”,  “plant me!”, “irrigate me!”.  Not to mention the constant demand of the harvest.

But for another week or two, it’s “tree time”.