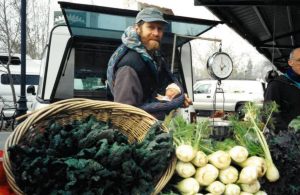 Paul Holmes with his infant son Walker (now 22) at the Davis Farmers’ Market.

Last week we received the very sad and surprising news that Terra Firma Founder Paul Holmes had passed away in his sleep at home in Davis at age 72.  He had retired from farming in 2018, although he remained an owner of TFF.  You can read his obituary here.

Paul started farming garlic in Winters while still studying for a Masters in International Agricultural Development at UC Davis in 1980.  He started Sky High Farm shortly after with friends from school in the hills west of Winters, becoming the 17th certified organic farm in an area that would eventually host hundreds. 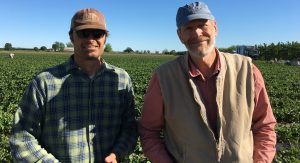 Paul had an amazing eye for quality produce, and was a stickler in the field and packing shed.  Even after we stopped selling at farmers’ markets in 2008 and he was no longer physically standing behind the produce at the table, he maintained a sense of accountability to our customers.  He developed the reputation for integrity and honesty that was the foundation for the success of our business, and which for which we continue to strive.

As our farm grew from 5 to 20 acres and then incrementally to 200, Paul took on the job of managing our sales and harvest.  Over his career, he made many close relationships talking daily with retail and wholesale buyers,  always juggling the long list of items that we grow and making sure they found homes.  He hated disappointing people, whether they were buying a pound of tomatoes or a thousand pounds, and could sometimes be found in the field after hours, harvesting items that the crew had run out of time to pick.

Over thirty years, Paul and I spent many thousands of hours discussing how to manage the farm. But his favorite topic was always “what to do next season” and even after a challenging or even downright terrible year, he was always full of optimism.  We saw him much less after he retired, but he would still drive around the fields every few weeks as well as chime in on our Slack channel and in meetings.  His questions were always astute, and he had a knack for identifying failures and strategizing how to avoid repeating them.

Hector and I owe a tremendous amount to Paul for giving us the opportunity to join an established farm and make it even more successful.  We will particularly miss his thoughtful and deliberative approach to decision-making.  We have always tried to achieve consensus when making important decisions, and Paul excelled at what he called “fence-sitting” — essentially acting as a mediator.

Paul is survived by his wife Jean and son Walker.  They are planning a memorial service for him; if you would like to attend, please let us know and we will send you an announcement via email when details are worked out. 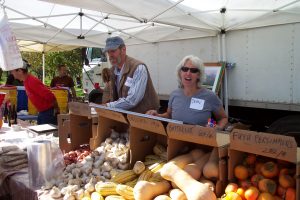 Paul and Jean at the market table during one of our annual CSA Farm Days.