pablito2021-07-28T18:57:42+00:00July 28, 2021|
There’s a “boneyard” out behind our farm shop — the area where we fix tractors and repair machinery. To most people, it looks like a pile of junk, but to a farmer it is pure treasure: piles of metal objects of various shapes and sizes that can be cut and shaped into new uses.
On Saturday afternoon I was perusing the boneyard for a particular size piece of metal for a planter I was modifying when I heard a faint sound. As I got closer, I assumed it was a hurt animal — a fox or maybe a raccoon. But it was a tiny kitten, hiding under a broken old implement.
I fully expected it to dart away, back to its mother and siblings. We have plenty of feral cats around the farm, especially at the packing shed. They help us keep the rodent population under control, and we do our best to spay and neuter the ones we can catch.
Instead, this kitten ran right up to me. And when I bent down hesitantly to touch it — with gloves on, mind you — it immediately nuzzled my hand and started purring. I looked around and found no trace of other kittens nor of its mother. So I picked it up and brought it back to the house and gave it some food — it was starving.
My wife Marisa and I have two cats (Lilo and Chilla) already, plus our dog Jack. The three other pets were not thrilled to meet the kitten, who promptly tried to eat all of their food as well.  We decided to give it a day or two and see whether he was a good fit.
The next day, I walked out to my truck to head to work. Jack followed me, as he usually does, and jumped into the cab to settle into his seat. And right behind him, the little kitten raced across the driveway and jumped into my truck too. I’m not sure who was more astonished, me or the dog. 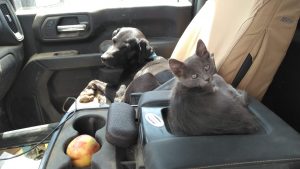 For the next two hours, as I went about my errands on the farm, the kitten explored the inside of my truck. And every time I made a stop — to check a watermelon field or the peach orchard — the kitten jumped out when Jack did and explored a bit.
I know other people who have cats who don’t mind riding in vehicles, but our cats are terrified of going in the car. Actually they are terrified of lots of things. And they don’t like Jack the Dog much. But they do catch gophers and mice every day, which is more than I can say about Jack. He just digs at their mounds until he gets bored and gives up.
But this little kitten thinks he is a Farm Dog. Despite us setting him up with a little bed inside a crate, he prefers to sleep right next to Jack in his dog bed, with his head resting on it.
We haven’t yet settled on a name for the little kitten, but it is definitely staying at the farm. Our current mascot is Lulu the Bulldog (R.I.P.), who used to ride around in my truck carrying a giant wrench in her mouth. But a cat in a pickup truck might give Lulu a run for her money. (Disclaimer: the truck was not moving when the photo below was taken). 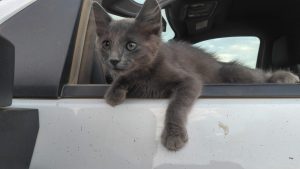