Four Years in the Making

Four Years in the Making

pablito2018-03-21T18:50:59+00:00March 21, 2018|
In early February an oversized gopher saw its shadow in Pennsylvania and people took it as a sign that Spring was here.  That prognostication turned out to be incorrect.
As vegetable farmers, we have use a different indicator: Asparagus.
Like Pauxatauny Phil, asparagus spends its winters hibernating below ground.  When the right combination of daylight and air temperatures warm up the soil enough, the roots or “crowns” awake from their slumber and start pushing tender spears up out of the ground.
Our asparagus field is young, planted just three years ago in January of 2015.  As one of a handful of perennial vegetables, asparagus produces for as long as 20 years from a single planting.  It takes a total of 4 years after the seeds are planted for the roots to grow big enough to make sufficient spears to harvest.  On our farm, we sow the seeds the first year in a densely planted field of “nursery beds” that is just a fraction of the size of the actual asparagus patch.  After 9 months of tending to the tiny and adorable asparagus seedlings — imagine matchstick-size spears — we dig up the roots using our potato harvester.
Meanwhile, we have been preparing the bigger field by making beds and then pulling a trench down the middle of each.  We carefully hand-place the “crowns”, which look a lot an octopus about the size of your hand, into the trench.  The roots have to be spread out below the growth point on the crown, which absolutely must be facing up.  Then the crowns are covered with an inch or so of soil. 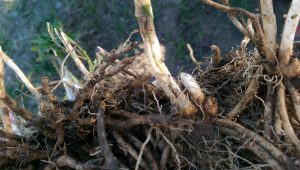 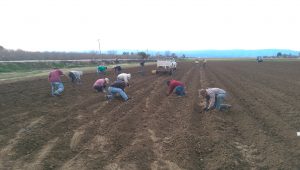 Hand-planting the crowns in the trenches.

As the young crowns begin to grow and push up spears — bigger now but still spindly — we hill more and more soil over the roots.  By the fall of the 2nd year, each plant is three feet tall and bushy, with dozens of frilly green ferns.  The third year, the plants get even bigger and taller — as high as 5 or 6 feet.
Four years after the seeds go into the ground and three years after the crowns are re-planted, we were looking forward to having our first real asparagus harvest from the new field this year.
It’s a location we have never grown asparagus in before:  a different soil, a slightly different microclimate where it is foggier during the winter and thus both warmer during the day and colder at night than fields we have used for asparagus in the past.  We were not sure when to expect harvest to begin.  But when spears started to push out of the ground this year during the warm weather in early February, we were concerned.  They were spindly and tough.  In some parts of the field there were quite a few, but in others almost none.  Like the Groundhog, they had misjudged the season.  Unlike Phil, though, they were also doomed.
Asparagus spears are frost-sensitive.  Even a light freeze causes damage, and a hard freeze causes them to melt down completely. And that is what happened to any and all of the spears in the field when the late February cold snap hit.
Happily, it was mostly just a false alarm.  Our juvenile asparagus got confused by the warm weather mid-winter, but in the end only a small number of spears emerged prematurely and got frozen.  The roots, young and confused as they were, got the message loud and clear:  “It’s still winter, go back to sleep”.  And so they did, until this week.
We harvested the asparagus for the first time on Saturday, and then again yesterday. This time, they have emerged uniformly, with reasonably good size — although there are still some skinny spears out there.  And there’s a bunch in your boxes.
This Equinox week, if you’re celebrating the official arrival of spring, you can also celebrate the 4th birthday of Terra Firma’s asparagus field…by eating it.    And let’s hope that we’re not still in for another 6 weeks of winter.
Thanks,
Pablito