pablito2016-03-16T17:55:37+00:00March 16, 2016|
April + Showers = May + Flowers.  The equation has never really applied to California, where it more often is true that March + Showers = April + Flowers.
A changing climate the last few years has necessitated further revision of the equation:  March * Climate Change = February.  Ergo, February + Showers = March + Flowers.
This year, the flow of the equation was effectively reversed with many trees and plants initiating flowers in early February and blooms reaching their peak last week during the rain.  So, for 2016:  February + Flowers = March + Showers.
We don’t grow flowers at Terra Firma.  Our interest in blossoms lies primarily in the next stage of their development: fruit and fruiting vegetables.  Our first planting of Snap and English Peas starting blooming almost a month ago, and the first fruits (pea pods) are now growing quickly.  The snap peas should be ready in two or three weeks.
The same biological process is occurring over in the strawberry field.  The first strawberry blossoms are often hidden deep inside the explosion of leaves that tends to occur at the same time in the spring.  So it came as a bit of a surprise to me to see thumbnail sized green berries out in the field yesterday.
Berries don’t size up and ripen quite as quickly as peas, but they don’t take forever.  Weather permitting, we expect to start harvesting ripe fruit around the 20th of April.  I don’t put much faith in long-term weather forecasts, but it’s a safe bet that it will rain that week.
There was one flower that totally surprised me yesterday on my walk around the farm.  It’s a subtle one, so small you usually barely notice it. 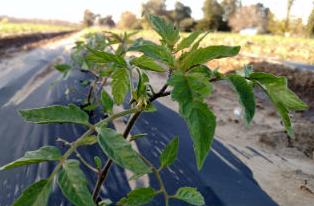 Yes, that is a tomato flower.  Our first tomato plants had their one-month birthday yesterday — they were planted on February 14th — and they celebrated by blooming.  Despite the 10 days of cold, stormy and wet weather they experienced last week, the first two weeks after we planted them it was warm and dry almost every day.  That gave them a big headstart and they are now off and running.  The plants aren’t just flowering; they are a foot tall, green and happy.
A lot can happen during the time takes an Early Girl tomato to go from flower to ripe fruit, and there is no guarantee these will make it.  But if they do, we could have ripe tomatoes in your boxes in May.  Which would lead to the equation:
March + flowers = May + Tomatoes
But for now that is an untested theory.
Thanks,
Pablito