First Tomatoes are in the Ground

First Tomatoes are in the Ground

pablito2016-02-17T18:34:30+00:00February 17, 2016|
Up until five years ago, we used to plant out our first tomatoes on or around March 15.  The exact date would depend on how many sunny days we got in January and February — seedlings grow much more slowly in the greenhouse when it is cloudy and rainy every day — and on when the soil was dry enough to plant.  Some years it was as late as the first week of April.
There have been years when our early tomato planting has been touch and go. Sometimes it was barely dry enough to get the plants in the ground.  Other times rain would arrive while we were planting, forcing us to stop.  This year, it was  cakewalk.
We planted out the first tomatoes of 2016 on Monday in 80 degrees and bright sunshine.  In the past, we worried about “hardening off” the tomatoes — getting them acclimated to colder temperatures after having lived all their lives up to that point in the greenhouse.  We would do this by turning off the heat in the greenhouse a few weeks before planting.  This year it was so warm in early February that we didn’t need the heat on at all in the hothouse.  And it was plenty warm outside. 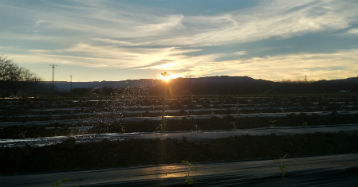 Once the tomatoes have had a week or so to get used to being outside, they can handle a pretty wide range of weather.  We’re pretty picky about which varieties we plant this early.  They are disease-resistant, cold tolerant and fast-growing, in addition to being tasty.  If El Niño returns in March, they will have no problem with the rain.  It will slow them down, but it won’t hurt them.
The biggest concern this time of year is the potential for frost, which can damage the tomato seedlings, or a freeze that could kill them.  We take precautions against this possibility by setting out pipe so that we can sprinkle the entire field at once — running water will keep the temperature from dropping below 32 degrees.  We don’t the pipe to irrigate the tomatoes; that task is accomplished by drip tape under the soil.
Like every other farmer in the state, we are hoping that this “summer in February” is just a hiccup in an otherwise wet year.  It was nice to have a couple of weeks of dry weather to get caught up on work.  In addition to tomatoes, we also planted arugula, beets, carrots, kale, lettuce, peas and spinach.  We even made a dent in the weeding.   Now we need a few weeks of rain to water the crops and orchards and fill up the reservoirs.
Thanks,
Pablito