pablito2016-01-13T19:29:48+00:00January 13, 2016|
Harvesting vegetables when it’s cold and wet presents lots of problems.  The rain and mud slows everything and everyone down, especially if it’s raining hard and windy.  It’s always our goal to minimize harvest activities on storm days or avoid them completely.  We try to do as much as possible between rain events to keep our crew warm and dry inside when they hit.
One of the biggest problems with growing vegetables in the winter is getting them out of the field.  We have miles and miles of farm roads through our fields.  During the dry season, the dirt is packed down and hard, allowing us to bring trucks right to the edge of the fields and load the harvested crop into them.
Once the roads get wet, our fields are accessible only by four-wheel drive tractors.  Each time a tractor drives on these wet roads, they make ruts that get deeper and deeper as winter progresses.  Come spring, the ruts are still full of water even when the fields are dry.
Several years ago, before the drought began, I decided we needed to find a better way to access these fields in the winter (other than putting in a half-mile’s worth of gravel road).  I wanted a small, light but powerful four wheel drive vehicle that could carry a reasonable amount of produce out of the field without leaving the deep ruts that a farm tractor leaves.
I mentioned it to a friend whose hobby is electric vehicles and he got excited.  We found something called “The Pug” on Craigslist — a light four wheel drive vehicle from the days before ATVs even existed .  The engine was dead, so we didn’t have to pay much for it.
Over several months, we put big flotation tires on the machine, found a used electric motor and installed it, built a compartment for batteries, and wired it all together.  Then we tore off the back chassis and built a four-foot square flatbed and installed a trailer hitch.  It test drove well on dry soil so we sat back and waited for it to rain. 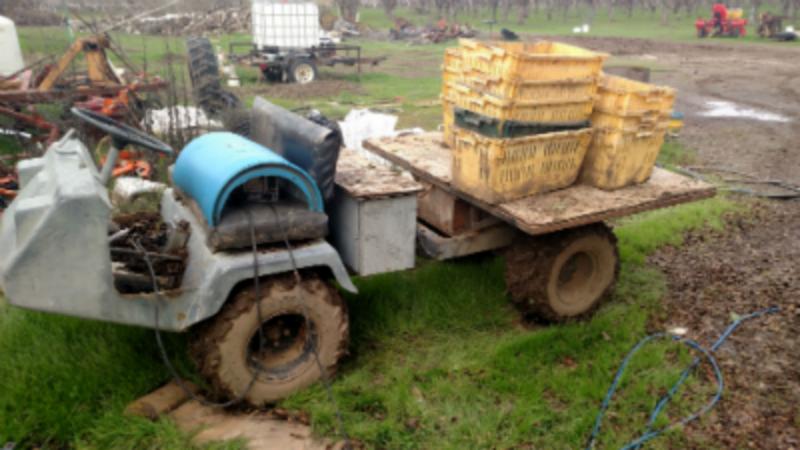 When the storms arrived in December, we took the Pug for another test drive.  The difference was obvious immediately — it barely crawled through mud, and within 10 minutes, the batteries were dead.  It sat there on the road out in the field, far away from any electrical outlet, for a month — until it was dry enough to finally tow it out with the tractor.
The solution seemed clear enough:  “needs more power”.  So we added a second battery pack.  And voila, the Pug powered through the mud at a faster clip, and held its charge for 3 hours.  The next day, we sent it out with the crew, pulling a trailer to harvest broccoli. A few hours later I got a call from the panicked foreman.  “Did you say it’s on fire?”  “Yes, it’s ON FIRE!”.
One of the wires between the batteries had indeed caught on fire and the Pug was stopped in its tracks.  I replaced the wire, and we drove it another 100 yards before another wire promptly burned up.
It turns out that an electric vehicle driving in heavy mud, pulling 1000 lbs. of broccoli, uses a great deal more electricity than it does when it is driving without a load on dry soil.  The load on the wires far exceeded their capacity.  The solution:  Install much thicker, heavier duty electrical cables – 25 feet of them.  Once the upgrade was complete, the Pug worked like a champ.  It could now easily — albeit slowly — pull a trailer carrying 3000 lbs. even on a rainy day.
So it was a little sad for me to see the machine sitting, unused, for the mostly dry winters of 2013 and 2014.  No one on the farm is ever happy to use it — it’s slow and noisy, and if you’re using it it means it’s muddy and wet.  Once the ground is dry, it is unnecessary.  And it isn’t heavy enough or strong enough to do the work that we do with other tractors.
But rain is back, and so is the Pug.  In fact, we’ve used it almost every day we’ve worked the last two weeks.  And with endless storms lined up across the Pacific, it looks like we’ll keep it busy for a while.
Thanks,
Pablito