Terra Firma owns about half the land we farm; the other half is leased from a number of different landowners.  Every few years one of those parcels of land gets sold for some reason, usually the new owner just continues with the lease.  But in 2012 we got a new landlord who seemed to be leaning towards terminating our tenure.

The property in question is important enough to our farm that we started looking for some land to replace it.  The problem was, we were pretty sure that there was nothing available within the 5 mile radius that we consider to be our “turf”.

We thought we knew the area pretty well, having driven down most roads and pored over the soil maps to identify pieces of land that might fit our needs:  not too big, not to small, and with good soil for farming.

Then one day I passed a road I had never seen or heard of before, about 5 miles from Winters. There was a “For Sale” sign with an arrow pointing down the road.  “What the heck,” I thought, and turned.  There were a few orchards planted on the road, but most of the farmland was growing hay — usually a sign of below-average quality soil.

The land for sale was 37 acres — about the right size.  There was field corn (for animal feed) growing that looked very nice, but then, field corn is not a picky crop.  I got out of my truck and grabbed a handful of the soil, and I was surprised by how loamy and rich it seemed.  There was plenty of water for irrigation.  The field was flat and shaped right for growing vegetables.  And the almond orchard right next door was clearly healthy and vigorous.

I raced home to look up the field on the USDA soil map.  It was a soil type I had never heard of before, a sandy loam with clay underneath it:  “Not suitable for orchard crops”.  And yet there was an orchard right next door.  Zooming the map out, one thing was clear:  the field was part of a 100 acre “island” of good soil in a sea of poorly drained heavy clay soil all around it.

The price was more than we could afford, but not by too much.  So I called the realtor.  She told me that the land had been on the market for 6 months without a single offer.  The USDA declaring the soil “Unsuitable for Orchards” made it much less desirable for most farmers in our area who primarily grow walnuts and almonds.  “Make an offer”, she said, “See what the owner says.”

I showed a soil scientist friend the soil map, and then we spent an afternoon digging holes around the property.  We only found one spot where there was a clay layer under the loam.  And the kicker:  a 40 ft. walnut tree growing at the back of the field, far from the road.  “They mapped it wrong”, my friend declared.  If the walnut tree had been next to the road where you could see it driving by, someone else likely would have bought the land months before to plant nut trees.

A few days later, we made an offer on the property substantially below the asking price, and it was accepted.  During the escrow process, we determined that the property not only had Lake Berryessa water from the irrigation district, but also a large and productive well.  Imagine, farmland in California with an abundance of water from multiple sources.As is usually the case, we had to wait three years before the land could be certified organic.   In the meantime, we grew cover crops and hay, and installed a more efficient irrigation system.  We also planted a small patch of asparagus, about 5 acres, that will take two years before it is old enough to harvest.

The land became organic in June this year, and we immediately began planting vegetables:  Winter Squash, Potatoes, and Leeks.  All have grown beautifully.  We harvested the first squash — a bumper crop — last week:  the Delicata that are in your boxes today. 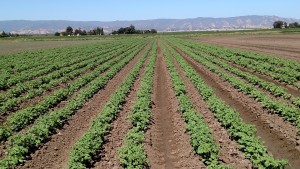 Potatoes growing at the new farm

This week we are planting another crop at the new farm:  Strawberries.  We are keeping our fingers crossed that the land will meet the demands of this picky fruit.  And because the berry patch is a big component of Farm Day, the event will happen at the new ranch this year.

It’s hard not to feel like we were somehow meant to farm this spot.  I am looking forward to having subscribers “meet” it, so to speak, and see if you feel the same.  As always, your continuing support of our farm was essential in allowing it possible for us to make it part of our farm.  We hope it will produce an abundance of healthy food for you well into the future.